Parents and children set up a pop-up zebra crossing to protest about a dangerous road outside a Portslade school earlier today (Wednesday 8 June).

The idea came from parents at St Peter’s Community Primary School who said that they were frustrated that their requests for a safe crossing in busy Church Road kept being turned down. 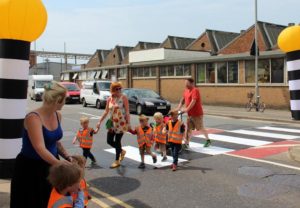 Teachers, parents and pupils at the school hope that the pop-up protest will help to persuade Brighton and Hove City Council to install the real thing.

The temporary crossing was literally rolled out today by parent Rae Powers to coincide with the start of Green Transport Week 2016 which runs until Sunday 19 June.

She said: “It’s urgent now. Church Road is already a designated haulage route between the expanding Shoreham Port and the A27 and is about to become even busier.

“It’s the recommended tourist route for road users to the new i360 attraction on Brighton seafront so even more traffic will soon come along this dangerous road. 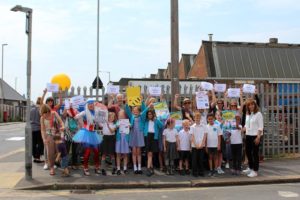 “The local council is aware of our concerns as we have been asking for a safe crossing place for three years.

“No real progress has been made and now there will be even more vehicles to cope with.

“Perhaps some of the revenue that the city will make from the new tower could be used for our crossing?”

St Peter’s head Michele Lawrie said: “The school recently expanded so even more families need to cross the road now and it’s especially tricky for grandparents and those with buggies.”

Yannick Read, from the Environmental Transport Association (ETA), the charity which helped the parents build the pop-up zebra crossing, said: “The idea may be tongue-in-cheek but the issue is deadly serious.

“With over 2,000 children killed or seriously injured each year on our roads, parents should never have to battle to have a genuine crossing installed.” 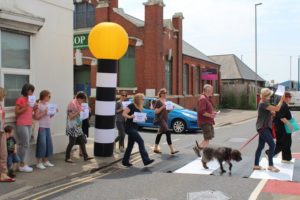 The ETA said that, according to the Highways Agency, a basic zebra crossing costs an eye-watering £114,000.

It added: “The pop-up zebra crossing, complete with flashing lights, is made from recycled sail material, an electric pump and two car batteries and cost only a fraction of that amount.”