Sussex Police seized more than 100 bottles of illicit booze in a series of raids in the centre of Brighton yesterday (Thursday 9 June).

The force said: “Police seized more than 100 bottles of illicit alcohol from a pub and café bars in Brighton city centre.

“The multi-agency visits were part of an ongoing operation to tackle organised crime groups within the Albanian community in the city.

“They found illicit bottles of wine and spirits which were seized and several of the premises are being investigated for breaching the conditions of their licences. The visits have also led to further inquiries being made by Immigration and HMRC.” 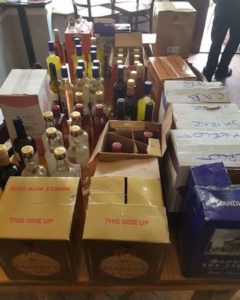 Brighton and Hove divisional commander, Chief Superintendent Nev Kemp said: “If you are a part of an organised crime group within the city, we won’t be just targeting you for the crimes you have been committing, we are also working closely with our partners to look at your businesses and your associates.

“We also want members of the Albanian community to know that they can trust us and any information they give us will be taken seriously and acted upon.

“By working together we can deter groups like this from operating in our city.”

Raids on six properties in Brighton and Hove on Tuesday (7 June) by police resulted in eight people being charged with conspiracy to supply class A drugs.

Eleven people were arrested and quantities of cash, cocaine and vehicles were seized worth an estimated £200,000 to £300,000.

Eight people have been charged with conspiring to supply class A drugs. They are