A birthday card for the Queen made by deaf schoolchildren was presented to the Lord Lieutenant of East Sussex this month. 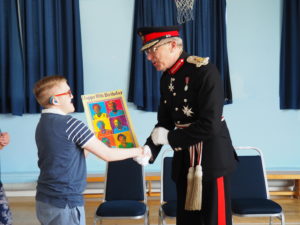 The pop-art 90th birthday card, made and signed by children at Brighton’s Hamilton Lodge School and College,  was accepted on behalf of the Queen on Tuesday by Lord Lieutenant of East Sussex, Peter Field.

Children were able to ask questions about the Queen and about the role of the Lord Lieutenant. They asked what the Queen would be doing on her official birthday and learned about Trooping the Colour and the planned picnics in The Mall.

Hamilton Lodge Principal, David Couch said: “We are really grateful to our Patron, the Lord Lieutenant of East Sussex, Peter Field for attending our special assembly.

“Often deaf children can feel left out and confused by the ceremonial heritage and events because nobody has explained to them what it means.

“They wanted to know why the Queen has two birthdays and what she will be wearing, as well as details of the celebrations and, how her family will be involved.

“They were really happy to have such an important visitor and were confident in asking lots of questions and learnt a lot this morning.”