Motorcyclist jailed over 100mph chase that ended in Brighton

A motorcyclist has been jailed for two years after a high-speed chase that ended outside a shopping centre in Brighton.

Police said that the biker was lucky to be alive. It was also a miracle that no one had been hurt in “the most outrageous incident of dangerous driving we have ever seen in Sussex”.

Much of the chase was captured on a video (below).

Gavin Collett, 32, unemployed, was sentenced for dangerous driving and two counts of failing to stop after an accident by Judge Jeremy Gold at Lewes Crown Court today (Friday 17 June).

Collett, who used to live in Freshfield Road, in Brighton, lost his helmet when he crashed during the pursuit which lasted more than two and a quarter hours.

He came close to hitting people on foot and smashing into a number of other vehicles as he sped through built up areas of Worthing and Brighton and Hove. 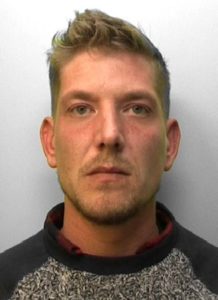 He was monitored from the air by two police helicopters as he raced across Sussex. He tore down Dyke Road and eventually hit a barrier at Churchill Square car park just before 5pm on Thursday 10 March.

He gave police the slip but handed himself in three days later and has been kept in custody while he waited to be dealt with by the courts.

Although he was driving while disqualified and without insurance and broke the speed limit for sustained spells, he is expected to be free within a year.

Sussex Police said: “A motorcyclist who narrowly avoided colliding with pedestrians and other vehicles during a high speed pursuit across Sussex has been jailed.

“Gavin Collett, 32, unemployed, of Bramber Road, Broadwater, carried out a series of dangerous manoeuvres at various locations, including built-up parts of Worthing and Brighton, on Thursday 10 March.

“On several occasions he went straight through red lights while pedestrians were crossing, mounted pavements, travelled in the face of oncoming traffic and overtook vehicles with little room to do so.

“Throughout the pursuit, he consistently travelled at excessive speed and contravened numerous traffic laws across the county.

“At Lewes Crown Court today Collett was sentenced to a total of two years in prison – 18 months for dangerous driving and three months for each of two counts of failing to stop after a road traffic collision.

“He received no separate penalty for charges of driving while disqualified and driving with no insurance.

“He was also disqualified from driving for three years and must remain on licence for at least 12 months on release from prison.

“His two-year prison sentence includes time already spent in custody from his arrest on 13 March.”

PC Ben Henwood, of the Sussex Police Road Policing Unit, who led the investigation, said: “Collett’s sentence is fully deserved and it represents the massively aggravated nature of his behaviour over an extended period of time.

“While this is a good result from a policing point of view, the best result is the fact that no one was injured on that day and we’re extremely thankful for that.

“We have reviewed the footage and this is without doubt the most outrageous incident of dangerous driving we have ever seen in Sussex.

“Throughout his journey, Collett showed a blatant disregard for anyone else’s safety and it’s a miracle no one else was hurt.

“He went straight across the flow of oncoming traffic at ridiculous speeds, he went through the fully pedestrianised area of Montague Street in Worthing, he mounted pavements to undertake cars when pedestrians were present and he travelled at breakneck speed between Goring and Ferring when there was no margin for error at all.

“It’s unbelievable how he hasn’t killed himself or anyone else. He’s lucky to be alive.”

Sussex Police said: “Collett was initially spotted by police riding in excess of 100mph on the A24 southbound between Broadbridge Heath and Findon at about 2.37pm before the National Police Air Service (NPAS) helicopter from Redhill was deployed to monitor his movements.

“Traffic officers and the police dog unit were also assigned but the helicopter was considered the best and safest option to monitor his progress without causing further danger to the public.”

PC Henwood said: “Police have tactics to stop motorcyclists. However, in this case we felt it was more appropriate to monitor his movements until a suitable point came where the risk to the public was reduced.

“The challenge we were faced with was to monitor him without doing anything that would spur him on.

“It was about having the right resources available without trying to exacerbate an already highly dangerous situation.”

Aerial footage of the incident, captured by one of the police helicopters, shows Collett circling the area before crashing on the A24 Warren Road, at the junction with Offington Drive, Worthing, at about 3.40pm.

He got back on his bike and carried on riding without his helmet towards Durrington before heading towards Shoreham along the A27.

A second helicopter was sent to replace the first one when Collett reached Hove.

He was traced riding back and forth between Brighton and Hove before he crashed for a second time at the barriers to the Churchill Square car park just before 5pm.

He dumped the bike and his leather jacket and made off on foot. Officers carried out a search in the town centre but were unable to trace him.

Collett handed himself in to police in Hampshire three days later.