A Brighton and Hove charity aims to tackle loneliness with its latest campaign by encouraging even small gestures to help people who may be isolated.

The charity Impetus said: “Brighton and Hove has one of the highest rates of loneliness in the UK.

“Research shows that being isolated or lonely has been proven to heighten feelings of depression and anxiety as well as increasing the risk of premature death by roughly 30 per cent.”

At an event held at the Synergy Centre in West Street, Brighton, today (Thursday 23 June) the charity announced its Yellow Rose Campaign. 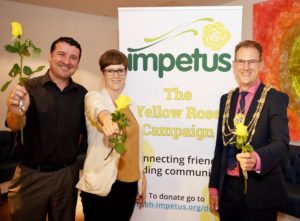 Impetus chief executive Jo Ivens with the chairman of the trustees Steve Hare and the mayor of Brighton and Hove, Councillor Pete West – Picture by Simon Dack / Vervate

It said: “This inspiring new campaign will coincide with the UN International Day of Friendship on Saturday 30 July and will be a city-wide campaign to spread awareness about isolation in the city using yellow roses as the emblem to represent friendship.”

Impetus helps vulnerable adults who are dealing with loneliness and isolation because of age, disability or poor mental or physical health.

It offers befriending, advocacy and support services and staff, volunteers and supporters were joined this afternoon by the mayor of Brighton and Hove, Councillor Pete West.

The event was held just three weeks after Impetus’s Neighbourhood Care Scheme was honoured with a Queen’s Award for Voluntary Service.

Impetus chief executive Jo Ivens said: “We hosted this event to celebrate our fantastic volunteers and our Queen’s Award and to announce our plans for the first ever Yellow Rose Campaign.

“We want to spread awareness about the vital impact even a small gesture can make to vulnerable people who are lonely or isolated. 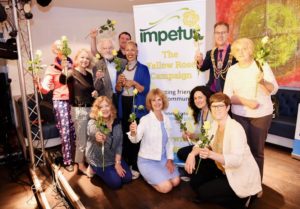 “Even just the act of giving a flower as part of the Yellow Rose Campaign or making the effort to have a brief chat with a neighbour can have a profound impact for or on those dealing with loneliness and isolation.”

The chairman of the trustees at Impetus, Steve Hare, said: “I am immensely proud of the work that the Impetus team do each and every day and humbled that they should be honoured by the Queen.

“The Yellow Rose Campaign is very timely for Impetus and will help to highlight the important issue of loneliness and isolation in Brighton and Hove.

“I urge everyone to think about someone who may be lonely on International Friendship Day and buy a yellow rose to help raise funds and support the work that Impetus do.”

To donate or volunteer, visit www.bh-impetus.org/home/yellowrose.