Animal lovers have reacted with horror after a seagull with a four inch nail sticking out of its neck has been spotted in Brighton parks – although the gull itself appears to be largely unaffected. 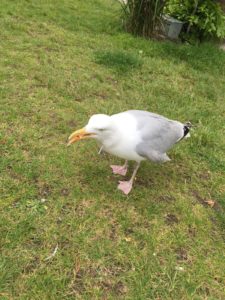 This picture of the herring gull – already given the nicknames Withnail and Frankengull locally – was taken last Sunday, 19 June, on The Level, and it was also spotted at Queen’s Park over the last three or four months.

The RPSCA has urged anyone who spots the gull to call them so it can attempt a rescue – although a local wildlife rescuer said that as the gull appears otherwise healthy, it was probably best to leave it.

A spokeswoman said: “The RSPCA is very concerned to hear about this gull with a nail through his neck and urges anyone who spots him to call us on 0300 1234 999 so we can try to rescue him.

“Sadly this is not uncommon, and every year the charity receives calls about gulls which have been persecuted and the victim of abusive attacks.

“We urge people to be tolerant of the wildlife around them. All it takes is a little care and understanding to minimise any inconvenience caused by gulls – they are normally just behaving in a natural way.

“Herring gulls in particular are a species of conservation concern in the UK and research has shown that overall gull populations are actually in decline.”

However, local seagull rescuer Roger Musselle, who runs Roger’s Wildlife Rescue in Woodingdean, said as the gull appeared otherwise unaffected, it could cause more harm attempting to extract the nail.

He said: “We have been aware of this bird for three or four months now. It’s been flying around in the Queen’s Park area and at the Level.

“It’s quite able to get around and from I hear, you wouldn’t know there’s anything wrong with it other than the nail sticking out.

“It must have been fired at the bird somehow. But the bird is doing well, and the problem is that sometimes, if we caught it and took it to a vet, the bird may die.

“As horrible as it looks, it’s better to leave it.”

It’s not clear how the nail ended up in the gull’s neck – although as it has a standard head, it cannot have come from a nail gun.