Police have released an e-fit image of a man wanted in connection with a burglary. 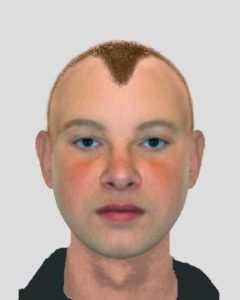 Shortly after 10am on Tuesday 17 May, the suspect is reported to have called at an address in Bristol Gardens, Brighton.

The occupant, a 97-year-old man, invited him in after he stated he knew the victim’s daughter and had come to collect some books.

They entered the living room together and the victim witnessed the suspect load a bag with items he believed to be books.

Upon returning to the house later, his daughter discovered five bottles of limited edition whiskey and brandy, boxed and worth a total of about £300, were missing.

The suspect is described as a white man in his 20s, about 5ft 9in, of medium build, with very short hair which was pointed at the front. He was smartly dressed in a dark suit.

Anyone with any information is asked to contact 101@sussex.pnn.police.uk.