A lorry driver is being investigated for driving while under the influence of drugs after a crash which left a cyclist fighting for his life. 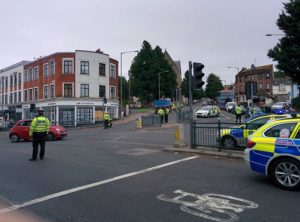 Emergency services were called shortly after 1pm on Saturday to the crash at the bottom of Elm Grove where it meets the Lewes Road.

The cyclist, a 27-year-old Brighton man riding a red Cannondale, sustained potentially life-threatening injuries and was taken by ambulance to the Royal Sussex County Hospital, Brighton, where he has been detained for treatment.

The lorry driver, a 47-year-old man from Littlehampton, driving a red Volvo tipper truck, was unhurt. He was arrested on suspicion of causing serious injury by dangerous driving and driving while under the influence of drugs. He was later released on bail until 7 September pending further enquiries.

Police are appealing for anyone who saw what happened, or in particular may have closed circuit television footage showing the collision, to email collision.appeal@sussex.pnn.police.uk or phone 101, quoting Operation Hartoft.