One of four supermarkets within 300m of a each other in one Brighton street is to close – just seven years after it opened. 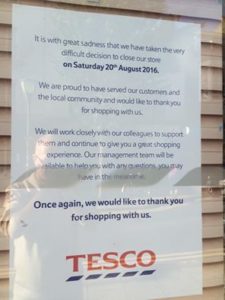 A sign went up at the Tesco Express in St James’s Street this week announcing the imminent closure of the store, where 17 people are employed.

The store opened in 2009, when there was already a Co-Op at one end, and a Morrisons near the other. In 2010, a Sainsbury’s Local opened at the Old Steine end, where the Taj supermarket once stood.

A Tesco spokesman said: “Closing the store was a difficult decision and our priority is to do everything we can to find alternative roles within Tesco for as many affected colleagues as possible.

“We’ll continue to serve customers from our Express stores on Jubilee Street and Queens Road and through our online grocery shopping service.”

While several Tesco stores have closed across the country as the company implements cost-cutting measures in recent months, the decision to close this branch was taken in isolation.

The store’s last opening day will be Saturday, 20 August.