A Brighton and Hove charity has received a Queen’s Award for Voluntary Service from the Lord Lieutenant of East Sussex Peter Field.

The Lord Lieutenant, the Queen’s local representative, presented the award to Impetus in a ceremony at the Sallis Benney Theatre, in Brighton, yesterday (Sunday 24 July).

Impetus provides befriending, advocacy and support services to vulnerable adults and helps people to befriend and support their isolated older and disabled neighbours through its Neighbourhood Care Scheme.

Neighbourhood Care Scheme volunteers and members received the award, the highest honour a voluntary group can receive and equivalent to a group MBE, at a traditional British Garden Party.

The Lord Lieutenant said: “It is always a terrific pleasure for me to present a Queen’s Award on behalf of Her Majesty the Queen.

“These awards are only made to outstanding voluntary groups who show a terrific commitment to their local community and Impetus are a shining example of how volunteers can make a difference.”

The Neighbourhood Care Scheme works with a team of more than 240 volunteers. They give about 10,500 hours of their time a year to support more than 280 vulnerable adults who are dealing with loneliness and isolation because of age, disability or poor mental or physical health. 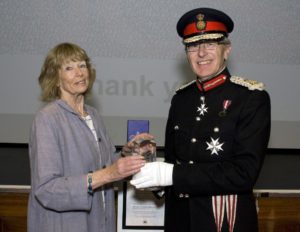 Last year Impetus signed up a record number of new volunteers to the scheme which is the biggest befriending network in Brighton and Hove and one of the largest in the country.

Brighton and Hove Impetus chief executive Jo Ivens said: “We’re delighted to be recognised with such a prestigious award and we wanted to highlight the incredible impact our volunteers’ work has across the city.

“Everyone involved with the charity gives their time, energy and expertise so generously and we all feel enormously proud that the work of our organisation and particularly our volunteers has been given this honour.

“It’s a tremendous achievement for the Neighbourhood Care Scheme and Impetus as a whole and it was wonderful that the Lord Lieutenant, the High Sheriff (Michael Foster) and the Mayor Pete West showed their support for our charity and its volunteers at this wonderful event.” 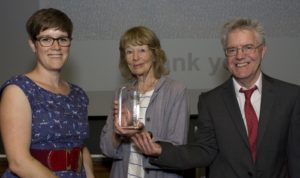 “BBC Sussex recently did a survey of 400 local people of all ages. Seventy per cent said they’d experienced loneliness in the last 12 months.

“Referrals to the Neighbourhood Care Scheme have been rising year on year so we know that our work is more needed than ever.”

The befriending service costs £8.90 per person per week. It provides vetted and trained volunteers making weekly visits, phone calls, a newsletter and continuing support from the Impetus staff team.

The charity needs to raise £20,000 this year to help meet the increasing demand for befriending in Brighton and Hove. Anyone who would like to donate or volunteer should go to www.bh-impetus.org.