People protesting about the possibility of a proposed second runway at Gatwick brought their campaign to Brighton yesterday (Sunday 24 July).

Local Green councillors joined Communities Against Gatwick Noise and Emissions (CAGNE) outside the Palace Pier to highlight their concerns.

They aimed to raise awareness of how many extra passengers would use trains on the Brighton Main Line every day if Gatwick was allowed to build a second runway.

CAGNE said: “The Brighton Main Line has caused great anger and protest by commuter due to delays and cancellation on a line that is not fit for purpose which according to Network Rail can’t physically be expanded.

“Gatwick expansion would add 90,000 extra passengers a day forcing many workers and travellers on to the roads demanding that the M23 and M25 be expanded at a cost to the local taxpayer.

“Gatwick expansion would also see a huge inward migration of workers looking for affordable housing, hospitals, GPs and schools while using the congested roads and railways to access Gatwick.” 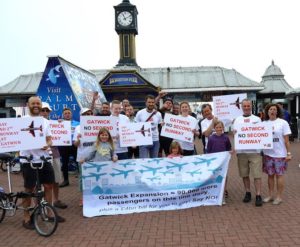 Sally Pavey, who chairs CAGNE, said: “Many think that Gatwick expansion is good news but where will the workers live and who will pay for the lack of infrastructure to support an airport larger than Heathrow?

“With Gatwick anticipating 95 million passengers being exported overseas every year how will our coastal regions complete against cheap holidays to Alicante and Costa del Sol.

“Will this expansion truly improve our economy or drain it?”