A former Brighton councillor has urged her fellow Christians to keep the faith – just not in the European Union – in a letter about local disappointment at Britain “coming out”.

The remarks were made by Christina Summers, a former member of Brighton and Hove City Council and Leave supporter, in a letter to the Christian newspaper Heart of Sussex.

Headlined “The People’s Republic of Brighton and Hove”, the former Hollingdean and Stanmer ward councillor wrote about Christians seeming to share the wider local dismay at the vote to leave the EU.

And her remarks about coming out carry echoes of the row about gay marriage that led to her expulsion from the Green Party and sitting on the council as an independent.

She wrote: “It’s official: the city of Brighton and Hove is suffering from cynical depression.

“Under normal circumstances ‘coming out’ is heartily welcomed here – indeed encouraged – but not quite in the way the EU referendum result defines it. 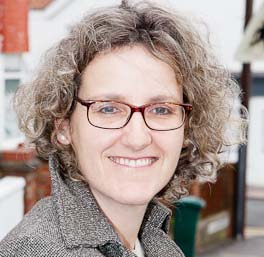 “When the BBC’s David Dimbleby uttered those historic words at 4.40am on (Friday) 24 June – ‘the British people have spoken and the answer is, we’re out’ – Brighton slipped into a catatonic state and remained there for a whole day.

“Naturalised foreign citizens suddenly expressed acute feelings of rejection. Reactionary activists added their signatures to the infamous petition demanding the government hold a second referendum and the confused republican separatists started a new one called ‘Brighton and Hove Independence Referendum – Leave UK, Stay in EU’, complete with draft passport, directed to Green MP, Caroline Lucas, who has the dubious honour of … doing something with it.

“For me as an ex-city councillor turned government and politics commentator, the only aspect of this extraordinary world event (over which God continues to sit sovereignly on his throne) that brought dismay was the Christian input and reaction.

“As I saw the commentary on social media and debated with established Christians and those in positions of influence or leadership in the city, I could have wept.

“There came a point when I could no longer distinguish between the believer and the non-believer, not just in terms of argument and reasoning (most of which was patently rooted not in faith but in fear) but also, sadly, in spirit. It became like throwing pearls to pigs (Matthew 7:6).

“‘This catastrophic result must be God’s judgment on the UK,’ was the Christian Remainers’ conviction.

“The church in Brighton knows well how to interpret the ‘appearance of the earth and the sky’, but it cannot (yet) interpret ‘this present time’ (Luke 12:56).