A police dog and his handler have been awarded a Chief Constable’s Commendation after chasing and catching a would-be robber who was carrying a knife.

Sergeant Gareth Jackson and his dog Sparky went after the man even though he was feared to have a gun when police were called.

He was one of twenty brave or outstanding officers to be recognised at an awards ceremony held in Haywards Heath for members of the Sussex Police Operations Command.

The force said: “This brave dog and his handler have been given the highest award from Sussex Police after going to extraordinary lengths to catch a suspected burglar.

“Police Dog Sparky and Sergeant Gareth Jackson were recognised for their heroics in the form of the Chief Constable’s Commendation.

“In the early hours of (Sunday) 29 November last year, police received a report of a burglary at a flat in Shanklin Road, Brighton.

“Sergeant Jackson and Police Dog Sparky arrived as the first on the scene and were told the suspect could have a gun.

“The man ignored Sergeant Jackson’s request for him to stay where he was and instead jumped out of the window of the address. 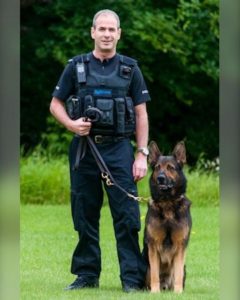 “Without any consideration for his personal safety but wanting to stop the suspect escaping, Sergeant Jackson identified himself as a police officer with a dog.

“The man tried to run from the area towards the busy Lewes Road and the Vogue Gyratory, and Police Dog Sparky was sent to chase him.

“The suspect got cornered between some parked cars and Sparky barked until Sergeant Jackson tried to arrest him.

“The suspect violently struggled, trying to punch the dog handler and kicking the dog, before running off again, pursued by Sparky.

“The chase continued and Sparky caught him by biting his leg. The suspect kicked Sparky in the head, but this led the dog to bite down harder.

“Thankfully, Sparky was unharmed and Sergeant Jackson was able to arrest the man.”

Sergeant Jackson said: “The arrest of this offender would not have been possible without the actions of my police dog and it demonstrates the real contribution that police dogs can make in apprehending criminals.”

The man who was arrested, William Piper, 23, unemployed, of Wilmot Road, Shoreham, pleaded guilty to attempted robbery, having an offensive weapon (a knife), and having class A and B drugs (cocaine and cannabis), at Lewes Crown Court on Wednesday 23 December. He was sentenced to 30 months in prison on Friday 29 January this year.

Chief Superintendent Chris Moon said: “This was a very violent situation, exacerbated by the concern the suspect had a gun.

“Sergeant Jackson acted selflessly and courageously with the knowledge that, if the man escaped, he could pose a significant danger to the public.

“His actions and those of Police Dog Sparky, who was being kicked in the head at the time, should be commended. Thankfully they are both ok.”