Record number off to Oxbridge from Cardinal Newman

A record number of students are off to university at Oxford or Cambridge from Cardinal Newman Catholic School.

Newman College – the sixth form at Cardinal Newman – said that two pupils were heading to medical school, two to Cambridge and seven to Oxford.

The news emerged as students picked up their A-level results this morning (Thursday 18 August).

“Particular congratulations also to Helen Galvin and Martha Coyle who will be studying medicine at their chosen universities.” 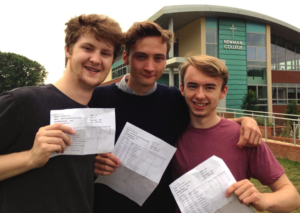 James Kilmartin, head teacher, was delighted with the results. He said: “The students are a credit to themselves, their families and the school.

“They have worked hard to achieve these results and I know that they will want to join me in thanking their teachers for the support and advice which has made a big contribution to their success.”

Dr Kilmartin added: “We are proud of each and every one of our students but I would like to particularly congratulate the record number of our students who have secured places at Oxford and Cambridge.

“As our sixth form continues to expand, we look forward to similar success in years to come.

The school said that the key headlines were