Tributes have been paid to an “incredible individual”, who sadly died in a road traffic collision in Henfield. 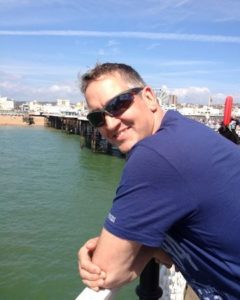 Paul Nash grew up in the Northamptonshire villages of Yardley Gobion and Greens Norton, and attended both Sponne School and the former Kingsbrook School, in Towcester.

He joined the Navy in 1985 at the age of 17, and after several years of service left to have his two sons Danny and Bailey.

He then moved to Brighton where he jointly managed The Cricketers in Black Lion Street – one of the oldest pubs in the city – with his brother Andy. It was there he meet his best friend ‘Dave the doorman’, who always looked out for Paul in the years thereafter.

Paul met his wife Kim 16 years ago, and the couple tied the knot on the Greek island of Rhodes – in the company of close friends and family – in 2009.

Kim said: “That was one of the best days of our lives, and one that I’ll always cherish. Paul was a terrific father to his two boys and a wonderful husband.

“Paul worked for Diageo (a consumer goods company) from 2000, where he met some fantastic people and was a great inspiration to many with the love, energy and enthusiasm he had for his work.

“He was an incredible individual who was a friend to so many people, and he touched so many lives in so many different ways.

“He was fun-loving, full of life and just great to be around. He always put others first and he will be greatly missed by all that knew and loved him.”

It was at about 2.10pm on Sunday (21 August) when the black Triumph motorcycle Paul was riding collided with a white Nissan Qashqai on the A2037 Shoreham Road, in Henfield. He was sadly pronounced dead at the scene.

The 47-year-old, from Rustington, leaves behind wife Kim, 40 – sons Danny, 25, and Bailey, 19, parents Rose and Alun, and siblings Coral and Andrew.

Anyone who witnessed the collision, or either of the vehicles in the area in the moments leading up to the crash, is asked to contact collision.appeal@sussex.pnn.police.uk or call 101, quoting Operation Alderstone.