A newly opened Brighton pizza restaurant handed over its first day’s takings from food orders to a local children’s charity.

Rockinghorse was presented with £1,653 by MOD Pizza, the American brand which has opened its second British branch at Brighton Marina.

Analiese Doctrove, head of fundraising at Rockinghorse, said: “We were delighted to partner with MOD Pizza in Brighton Marina for their grand opening event as part of their community outreach programme.

“They have raised a fantastic amount of money to support sick children right here in Sussex and we are so grateful for their support. They are a brilliant team to work with.”

As the official fundraising arm of the Royal Alexandra Children’s Hospital, in Brighton, Rockinghorse raises money for items ranging from furnishings and toys for the wards through to cutting-edge diagnostic machines and life-saving medical equipment.

Jemma Morgan, head of UK marketing at MOD Pizza, said: “We’re thrilled to have teamed up with Rockinghorse for our grand opening day charity partner.

“Rockinghorse is a fantastic charity and does some exceptional work for local children and the Brighton community and I’m really proud that MOD could help support and fundraise for such a great cause.” 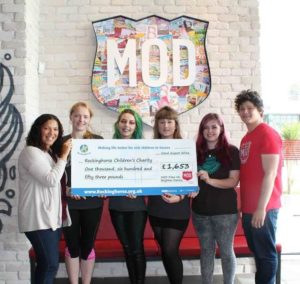 Analiese Doctrove, from Rockinghorse, with staff from MOD Pizza in Brighton

She said that MOD was a pioneer of fair pay and a champion of second chances, adding its main ingredient for success was its employees – known as the MOD Squad – who are encouraged to support their fellow employees and be active in the community.

The restaurant plans to continue to support Rockinghorse by offering specially organised pizza-making sessions for young patients from the Alex and other children’s centres and services they support in Sussex.