A man was stabbed three times in a savage attack near Brighton’s Churchill Square which also left his friend wounded when he tried to intervene last night. 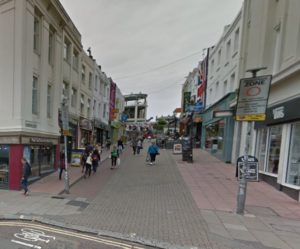 The attack happened shortly after 8pm, when three men attacked a 22-year-old man who was stabbed three times to the body in Cranbourne Street, Brighton.

His friend, a 23-year-old man, attempted to intervene and received a single stab wound to the back.

The victims, both from Brighton, were taken to hospital for treatment. The injuries are not thought to be serious or life changing.

The main aggressor is described as a black man, with a silver tooth, wearing an all-grey tracksuit and black Nike Air Max trainers.

The second suspect is described as a tall, mixed race man.

A third man, believed to be present but not actively involved in the incident, is described as black, about 5ft and very stocky.

The suspects are believed to have fled on foot towards Duke Street.

Alternatively, you can call independent charity Crimestoppers anonymously on 0800 555 111.