Another setback for deserted Lansdowne Place hotel as buyer falls through

The future of one of Hove’s landmark buildings is still unclear as it goes back on the market thanks to a developer’s plans to buy it falling through.

Permission was granted to turn The Lansdowne Place Hotel into 50 flats and mews houses, knocking down the middle extension and building two penthouses on its roof, in 2014. 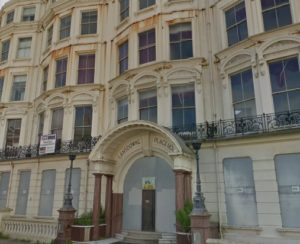 But by the time the plans were approved, the applicant had gone bust, and just before a deal to sell it was completed, the buyer’s financial backers pulled out.

Last week, For Sale signs went up again and a brochure is now being put together ready for it to be advertised for sale once more.

Matthew Hollywood at Mishon Mackay said: “We are just finalising the website and marketing literature. So will be formally re-launch it next week. Changing the boards back to For Sale was the simple step.

“We’d sold the hotel however before completion occurred the buyer lost their funding. They still want to buy the property but can’t secure new funding arrangements in time. Therefore we have had to re-market the property.

“However we are confident of securing another buyer fairly swiftly as its eminently saleable.”

Meanwhile, residents are growing frustrated at the lack of progress in seeing the site of the hotel, which closed after Christmas 2012, brought back into use.

Neighbour Dan Wilson said: “It’s been nearly four years since the Lansdowne Place hotel, fondly still referred to by many as the Dudley, closed its doors. Since then it’s been empty and neglected despite planning permission for it to be turned into flats.

“It’s such a shame to see it decay and a crying shame that it has taken so long to be brought back in to use. Not least because so many people in the city need somewhere to live.”

Drivers warned about wide loads on A23 and A27