Albion were outplayed, outfought and at times outmuscled by a lively Brentford at the Amex this afternoon (Saturday 10 September).

New Albion record signing Shane Duffy had a shaky start, almost giving away a penalty in the early stages.

The partnership of Duffy and Lewis Dunk looked at times an uncomfortable one.

Brentford looked far more mobile than the Albion. Josh Clarke caused Gaetan Bong some problems but with no real end product to his progress.

Anthony Knockaert saw a shot tipped over by Daniel Bentley in the Brentford goal. And it was soon after that Scott Hogan sprinted past Bruno Saltor and evaded Duffy’s despairing lunge to slot the ball past David Stockdale. Hogan’s pace was telling and the way he angled himself and shaped to shoot was impressive.

Albion initially offered little in return. An always rising and wide half volley from Glenn Murray was all they could muster.

The Seagulls were misplacing passes. Jamie Murphy and Tomer Hemed miscontrolled a couple of times at vital moments.

The Seagulls had a chance towards the end of the half but not before Hogan nearly doubled Brentford’s lead. Albion were saved by Stockdale’s outstretched leg.

Albion’s best chance fell to Hemed after Murray hedged back across goal by Harlee Dean headed his effort off the line while under pressure from Murray.

Hemed was then lucky to escape with just a booking after pushing Dean over.

The second half started with Brentford attacking again and Clarke trying his luck from distance.

Albion weren’t having much luck. The normally dependable Bruno misplaced a cross with Albion pushing forward, then snatched at a good chance and sent it well over.

Hemed tried to sweep in a Knockaert cross home at the far post but miscued and the ball was gathered by a grateful Bentley.

Manu received a pass from Murphy in the box and it looked for all the world that he was tripped by Dean.

Referee Duncan gave a free kick to Brentford and booked Manu for simulation.

Not long after, the pair were involved in a pushing match. The referee summoned Albion captain Bruno to make it clear that the Dutchman was on a seemingly harsh final warning.

Hogan got clear again but was foiled by Stockdale. Then more indecision between Bruno and Duffy left the ball to fall to Clarke who fired wide from the edge of the area.

Dale Stephens replaced the quiet Olly Norwood on 67 minutes to make his first appearance since his transfer saga.

But three minutes later that man Hogan got clear again and fired high into the net to double the Bees’ advantage.

Even with 20 minutes left it was clear Albion’s attack was fairly toothless with Murray looking out of sorts and Manu, almost scared to touch anyone or risk dismissal, wasn’t going to launch a recovery.

Jiri Skalak replaced Murphy but found it difficult to get involved.

Clarke had another chance to make it more emphatic for Brentford but was again wide.

Worryingly for Albion a vast majority of the 26,388 that it was announced were in attendance had left well before the end. 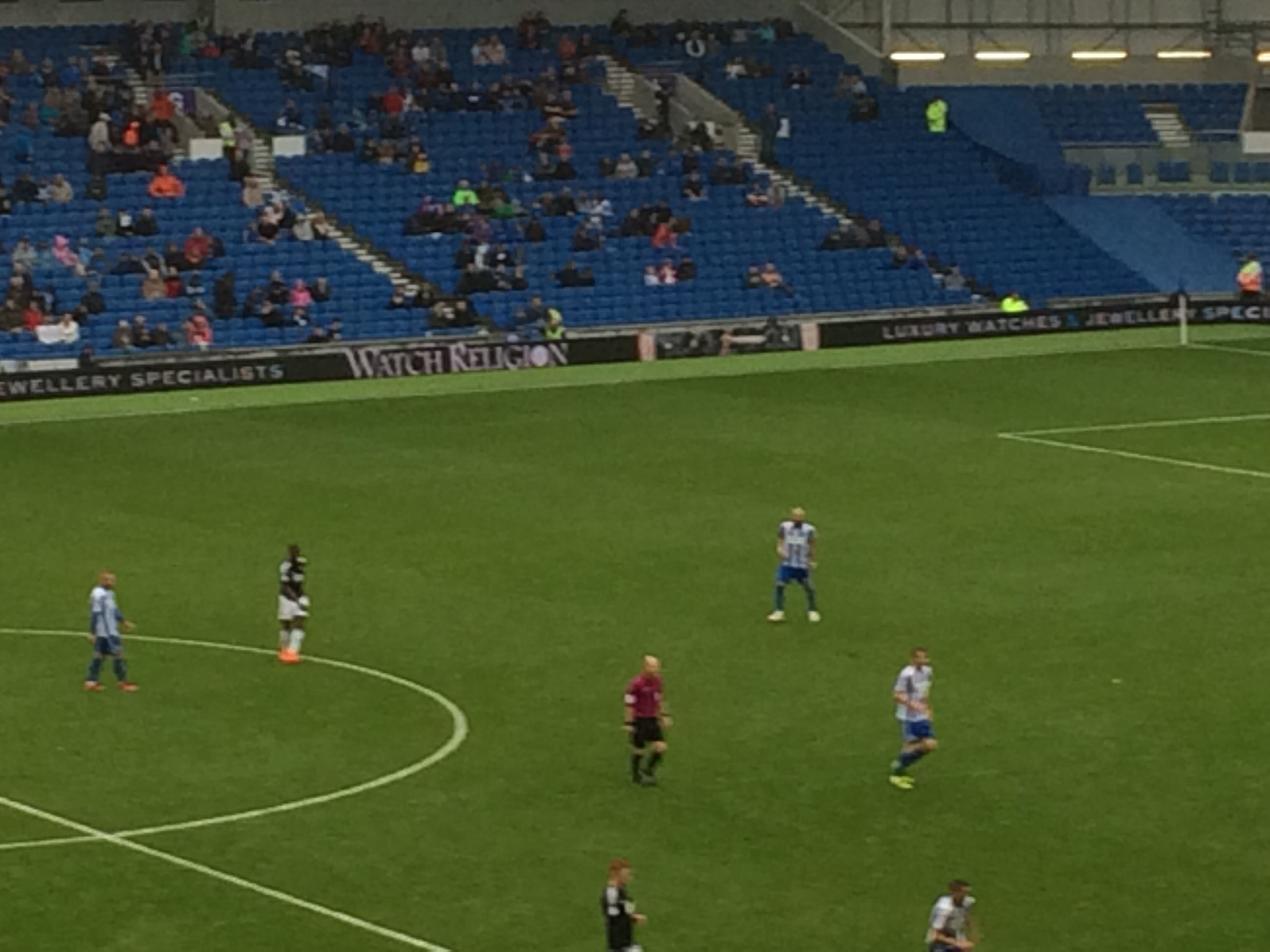 In May Albion were inches from the Premier League. That dream looks a little more distant this evening.

How Albion could do with a compact and quick little forward like Hogan. He is very much in the Michael Owen mould. And how he would complement Murray.

Albion have a generous helping of defenders and midfielders but are so light on forwards. The out-of-favour Manu was used as an emergency even at this early stage of the season.

The Seagulls take on league leaders Huddersfield at the Amex on Tuesday (13 September).