A Brighton road was cordoned off and residents evacuated after a suspicious item was found at a flat there this afternoon (Sunday 11 September).

Donald Hall Road in Whitehawk was evacuated earlier this afternoon after the occupant of a flat in the Calendula block found an artillery shell. 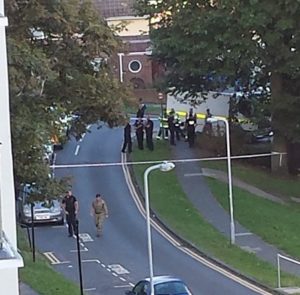 A police spokeswoman said: “Police were called to a flat in Donald Hall Road, Brighton, in regard to a suspicious item found by the occupier.

“Police are co-ordinating efforts with the fire brigade and Brighton and Hove City Council to evacuate residents in the vicinity of the affected flat so that the article can be dealt with.

“Cordons are in place for public safety and all agencies are grateful for the assistance of the public who are affected.”

It’s not yet known how many people are affected, but hundreds of people live in the Calendula block of flats. The community centre is open for anyone who needs somewhere to wait.

The bomb disposal squad attended and left the scene at about 6.30pm.

It was rumoured on the estate that the item was an unexploded Second World War shell which the owner found under his bed – and Sussex Police later confirmed that it was an artillery shell.

Bomb disposal experts assessed and removed the item and said that it was not a danger to the public.

Sussex Police were called shortly after 3pm and evacuated the premises in Donald Hall Road, Brighton, until they could rely on the expertise of the EOD (explosive ordnance disposal) specialists.

The force said: “EOD have attended the flat and assessed and removed the item which was identified by them as being an artillery shell.

“EOD removed the item without any further precautions. The item did not transpire to be a danger to the public.

“Evacuated persons have returned to their homes and cordons were removed at 6.10pm.”