Two teenagers were in custody overnight after a 16-year-old boy was stabbed in Portslade yesterday afternoon (Saturday 10 September).

A 15-year-old boy and an 18-year-old were being held by Sussex Police after being arrested while the victim underwent surgery for life-threatening injuries in hospital.

Neighbours gave first aid to the boy who was stabbed in the neck and stomach outside the Co-op convenience store on the corner of Abinger Road and Shelldale Road, in Portslade, shortly after 5pm.

They reported seeing teenagers flee the scene on foot and by bike.

Sussex Police said: “A 16-year-old boy was taken to hospital with serious, potentially life-threatening injuries after being stabbed in Portslade on Saturday afternoon.

“Emergency services were called to the scene in Abinger Road at 5.17pm where a group of youths were gathered in the car park of the Co-op store.

“The victim was taken to the Royal Sussex County Hospital in Brighton and was taken with serious stab wounds into surgery on Saturday evening. 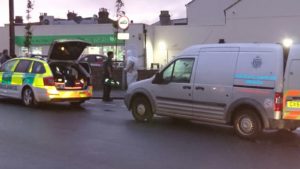 “Both remain in custody.”

Inspector Ed Neve said: “This is an incident that was confined to a small group and we do not consider them to be a threat to the general community.

“We have identified a number of suspects and two have already been arrested. We are continuing to search for a number of others.”

Sussex Police asked witnesses or anyone with information about the stabbing to phone the force on 101, email 101@sussex.pnn.police.uk or call the independent charity Crimestoppers anonymously on 0800 555111 quoting Operation Autumn.