A shake-up of Brighton and Hove’s new schools admission process could be put on hold as the site for a new secondary school in the east of the city has still not been determined. 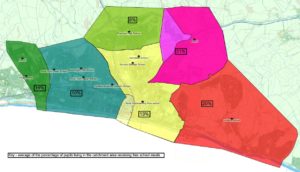 But controversial changes to the city’s catchment areas appear to have been all but scrapped, with a couple of tweaks and a new policy of allocating a set number of places to children on free school meals to address social inequalities proposed instead.

The city council ran a consultation in the spring asking parents whether they thought places should be allocated by distance or lottery, and how many schools should be in each catchment.

The city council was due to draw up more specific plans based on the responses for a new admissions policy to begin for the 2018/19 academic year – but today, a report was published which recommended delaying this because of continued uncertainty over the new school’s site.

In April, the council announced the University of Brighton, which will be running the new free school, was looking at two sites in the grounds of City College and Brighton General Hospital.

Today’s report says both of these are still in the running, but a new report on the search for a site is proposed.

Meanwhile, the first consultation results show that there were significant concerns amongst both parents and working groups of teachers, councillors and governors about the impact of large catchments on school journeys and friendship groups.

As a result of journey concerns, the existing catchments have been kept, with Coldean moved into undersubscribed BACA’s catchment and the new free school added to oversubscribed Varndean and Dorothy Stringer’s catchment.

Only children who are or have been in care, who have medical reasons for attending that specific school or who live in the catchment and have siblings at the school will have a higher priority.

“A further report will come to the committee in due course, outlining the proposed admission arrangements for September 2018. In accordance with the school Admissions Code the arrangements will need to be determined by 28 February 2017.

“At this time it is not anticipated that any change will be made to the current arrangements for 2018/19 because of the uncertainty [over the new school site and BACA and PACA admissions].

“It should be noted that for this admission year there are sufficient places across the city’s schools to accommodate all pupils who require one.”

The new catchment drawn up by the working groups is likely to form the basis of a consultation for admission arrangements for the 2019/20 academic year at a later date – subject to the site of the new school being announced.

The school is still due to open in September 2018, but will use a simple home to school distance tie-breaker to decide applications.

The chair of the council’s cross-party working group on secondary school admissions, Councillor Daniel Chapman, said: “With secondary age pupil numbers rising there is a need for a new secondary school in the city. The council has been working closely with the University of Brighton Academies Trust to help them find a permanent site for their new school.

“The new school is due to open in 2018 in the eastern central area of the city. For the first year it is anticipated that the new school will use home to school distance as a tie-breaker in the event of over-subscription, so this will help address the need for places in this area.

“The University of Brighton Academies Trust is keen to be part of the Brighton and Hove family of schools and so will look to be part of full admission arrangement from September 2019.

“The cross party working group will reconvene once the site of the new school is confirmed to make a recommendation to go out to formal consultation in due course.”

A spokesman for the University of Brighton said: “We are working closely with Brighton & Hove City Council and the Education Funding Agency to identify a suitable site for the new school. We are continuing to pursue two potential sites for the new school: the Brighton General Hospital site at the top of Elm Grove, and a section of City College’s estate on the east side of Pelham Road in the city centre.”