Police have arrested a man in connection with a stabbing incident in central Brighton which left two men wounded – and detectives are still looking for another suspect. 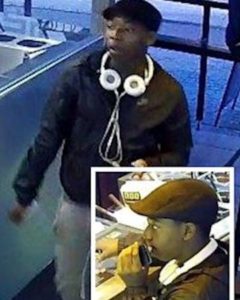 The 18-year-old man from Croydon was detained on suspicion of committing grievous bodily harm, affray, possession of a knife and possession of controlled drugs. He has been released on bail until 9 November.

The assault happened just after 8pm on Thursday, 1 September and followed an argument between a group of men outside the Metro Bank in Churchill Square. This led to two of the men producing knives and stabbing two others.

One of the victims, a 22-year-old Brighton man, ran from the scene, but was pursued by the suspects down Cranbourne Street where he was attacked again. He was taken to the Royal Sussex County Hospital in Brighton where he was treated for stab wounds to his groin, buttock and back. He was released the following morning.

A second victim, a 24-year-old man also from Brighton, required stitches to a small wound to his back.

The other suspect is still being sought by police. He is black, around 5ft, aged between 20 and 25 and wearing black clothing.

It is believed that he frequents Brighton, but may be from the south London area.