Play equipment at a park in Peacehaven has been damaged and police are searching for the vandals.

The incident took place at Piddinghoe Sports Park, also known as Centenary Park, between the evening of Wednesday 21 September and the morning of Thursday 22 September.

Newhaven and Peacehaven police said that paint was stolen from the football club next door, Peacehaven and Telscombe FC, and was used to damage the equipment.

Police said: “The paint was thrown around in the sand as well as on the wooden equipment, so much so that it is very likely the offenders will have paint on their clothes and shoes.

“So, parents, did your son/daughter come home with paint on their things on Wednesday night?

“We are appealing for help from any members of the public who may have seen something at the time, or who might have information which could help us find the people responsible for this vandalism.”

Police predict it will “cost a fair amount and some considerable time to put right which will affect all the people who regularly use the park”. 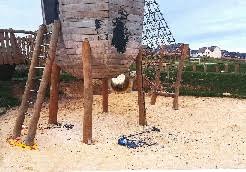 The two children’s play parks were opened in spring 2015 as part of the Big Parks Project. The project was set up in 2011 to improve leisure facilities in Peacehaven and was given a £2 million donation from Southern Water and Bovis Homes.

Maggie Ordever said: “Terrible shame – a friend took us to this park on our last visit to Peacehaven and we were so impressed with how it had improved the area. Really saddened to see it so badly treated. People power and parent patrols might help.”

Nat Alie said: “CCTV needs to be invested in. Cleaning it up does not prevent it happening again. Such a shame as I take my children often. Beautiful park.”

Hannah Price said: “Absolutely gutted. This is a fantastic park where a lot of money and thought has been put together for the children to play for free.”

Anyone with any information about the incident is asked to phone Sussex Police on 101 or email 101@sussex.pnn.police.uk and quote reference 519 of 22/09.