A popular family doctor is retiring this week from the practice that he set up in Portslade almost 30 years ago.

Patients and colleagues spoke with sadness about the departure of Alex Khot, the founding GP (general practitioner) at the Links Road Surgery, near Portslade Station.

One of those patients, Councillor Dawn Barnett, said: “He’s a wonderful doctor – a traditional doctor. He knows everyone’s name. He knows all his patients. He’s going to be sorely missed.

“You don’t have to fight to get past the receptionist. It’s team work. He will be greatly missed but we wish him all the best in his retirement.”

Dr Khot, 66, the London-born son of Indian parents, first moved to Brighton in 1979 and worked at the old Royal Alexandra Children’s Hospital, in Dyke Road.

One of his contemporaries was Xavier Nalletamby, who also went on to become a GP locally and has just stepped down as chairman of the Brighton and Hove Clinical Commissioning Group (CCG). 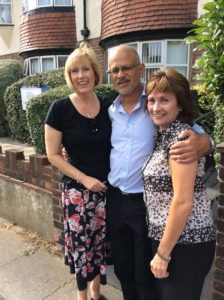 After his stint at the Royal Alex, Dr Khot worked in obstetrics at the Royal Sussex County Hospital for six months.

In 1986 he joined Andrew Polmear in Sackville Road, Hove. He and Dr Polmear subsequently co-wrote a textbook, Practical General Practice, which has run to six editions. Dr Khot said: “It probably helped me more than anyone who ever bought it.”

Later in 1986 Brian Kirkwood, a GP at Portslade Health Centre, “indicated that it might be worthwhile setting up in Portslade as it was an under-doctored (open) area”.

He said: “I was given permission and I actually started the surgery on 18 February 1987, initially by myself without a single patient.”

The practice list quickly grew to more than 1,800 patients. Dr Khot said: “Dr Peter Dickens joined me from Burwash Road and we did a conversion. We started at number 27 and bought number 29 and that was converted into a bigger surgery.”

His first wife, Linda, a nurse, was “fundamental in setting up this practice and has been a brilliant mother to my children”. His second wife Betty is a epidemiologist, with two children of her own.

And now at Links Road there are three other partners – Dr Peter Alderman, who will take over from Dr Khot as senior partner, Dr Julie Ebbage, who will take over Dr Khot’s list, and Dr Nicola Coleman, who plans to retire in late February. They are supported by Dr Amilia Alifrangis, a salaried GP. 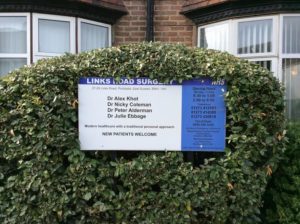 Dr Khot said that the patient list had grown to just over 6,000, adding: “It’s a fairly stable patient list – good straightforward people. They respond well to good service and don’t overall abuse the service. And primarily they have a good sense of humour. They have to with me!”

He is serious though about reassuring patients about the transition. He said: “I’m trying to make certain that they feel confident. I think the principles of the practice will continue.”

He said that the surgery had stayed true to its original mission statement – “the highest quality clinical care, the best customer care and the best organisation.”

Again, his sense of humour is evident when he admits that the third and final clause – the best organisation – might once have said, “the least headache to us!”

“The prime reason for that is continuity of care by individual lists and a lower list size per doctor.”

He conceded that this meant a lower income than the level enjoyed by some GPs but a better quality of life. 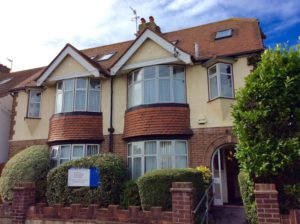 “It’s been a very satisfying and worthwhile job that is well enough paid and has been recession-free,” he said. “It was an easier era for us.

“There is tremendous satisfaction being in the role of medical doctor and in the pastoral role … looking after people as people.”

Technically he retires on Friday (30 September) but he saw his last patient today (Wednesday 28 September).

What next? “I’m going to look after grandchildren, live life and keep active. I’ve got an allotment with friends. I cycle. I canoe.”

For all the changes – and some have bemoaned the changes in the way that family doctors work – the Links Road Surgery has a traditional feel, coupled with an evident warmth and humour.

But on a serious note, Dr Khot said: “General practice has had a lot of bad press. But there are a hell of lot of caring GPs in this country. General practice is fundamental to the functioning of the NHS.”