Emergency services rescuing a driver from a car which flipped over on Hove seafront found not only a casualty but the reason she got there – a half-empty bottle of wine. 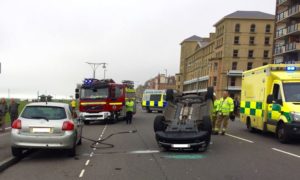 Saan Scutt was fined by Brighton Magistrates’ Court last week for the 6pm crash in Kingsway, near First Avenue, which stopped rush-hour traffic on Monday 20 June.

Scutt’s black Fiat 500 ended up on its roof in the opposite lane. After being checked over for minor injuries by paramedics Scutt, of Greenfields, Wick, was required by police to take a roadside breath test, which she failed.

She was then taken to the Royal Sussex County Hospital, in Brighton, where a blood sample was taken.

Scutt was later charged with driving with 180mg of alcohol per 100ml of her blood. The legal limit is 80mg per 100ml of blood.

The 28-year-old telephonist pleaded guilty at Brighton Magistrates’ Court on Thursday 6 October, where she was disqualified from driving for 22 months. She was also fined £120 and ordered to pay costs of £85 and a £30 victim surcharge.

The incident occurred on the A259 Kingsway, in Hove, close to the junction with First Avenue, at about 6pm on Monday 20 June. Scutt had been travelling westbound.

The parked vehicle involved in the collision – a silver Toyota Auris – was unattended and no other injuries were reported.