A pavement cash machine in Hove was apparently blown up and its contents stolen by burglars last night. 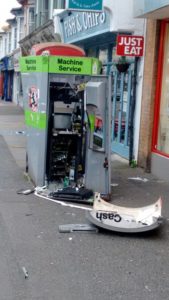 The machine, outside Iceland in Blatchington Road, was discovered in pieces this morning. One passer by said it appears the burglars used a technique involving flooding the machine with inert gases which react without combusting. forcing the machine open without damaging the notes.

It took place at around 3.40am and it is thought a gas explosion was caused to blow apart the stand-alone Cashzone machine. Firefighters attended to ensure the scene was safe.

A vehicle, possibly a saloon car, was seen nearby before it travelled south the wrong way along Belfast Street.

Detectives are keen to hear from anyone who saw what happened or who noticed anything suspicious in the area during the early hours.

Detective Inspector Andy Wolstenholme, of Brighton CID, said: ““As well as seeking information from anyone who may have witnessed this raid, we’d also welcome calls from anyone who may have seen people acting suspiciously in the area prior to it being carried out. There is a strong possibility that those responsible may have checked out the scene in advance.”