Mr Hunt visited Cardinal Newman Catholic School to find out how mental health issues were being dealt with.

The Conservative cabinet minister ask if he could meet pupils on Monday (10 October) when a local campaign – #iamwhole – caught the attention of people in government.

The campaign aims to tackle the stigma around mental health and make it easier for young people to speak out and find help. 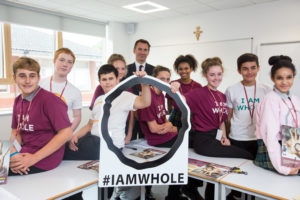 Mr Hunt said: “It has been a privilege to come to Cardinal Newman Catholic School today.

“I’ve been struck by the compassion and intelligence of staff and pupils and the genuine desire to work with local services to break the stigma of mental health issues and ensure that everyone gets the support they need.

“Improving children and young people’s mental health is a top priority which is why we have invested £1.4 billion to help everyone get the right care at the right time.” 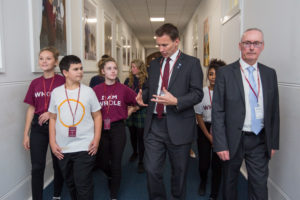 The #iamwhole campaign started on Monday – World Mental Health Day – with a boost from Brighton pop star Jordan Stephens – one half of the hip-hop duo Rizzle Kicks.

Dozens of local youngsters attended a launch event at the i360 where with Jordan Stephens played his new single Whole in which he sings about fighting “my own crazy”. 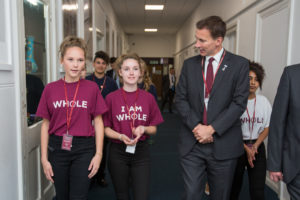