Car crashes into bedroom of house in Portslade

A car crashed into the bedroom of a house in Portslade yesterday evening (Saturday 22 October).

The accident happened in Southdown Road at about 5.45pm. Sussex Police said that the elderly driver of the automatic black saloon car was taken to the Royal Sussex County Hospital in Brighton with minor injuries.

The police were unsure whether the driver had suffered a medical episode or if there was another cause. 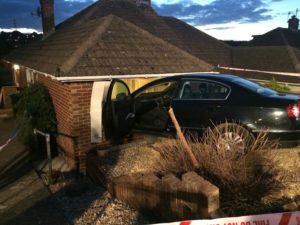 “His driveway is next to her house so perhaps he was trying to park or hit the wrong pedal.

“No one was hurt thankfully but the man was taken to hospital to be checked over.

“My neighbour had to leave the house while the fire brigade and police checked if the house was structurally ok.

“They removed the car by pulling it out with a tow truck at approximately 8.30pm but it has left an almighty mess.” 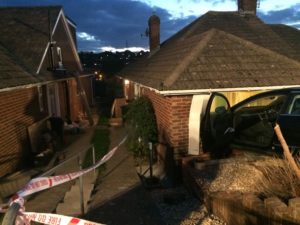