Sussex Police has issued a plea to the public to help find a man who robbed a disabled man in his own home so that they can return him to prison.

Officers are trying to find Lee Paterson, 39, a former hairdresser, who used to live in Locks Hill, Portslade, and Denmark Vilas, Hove.

Paterson, who has since been released on licence, carried out the robbery with two other men – Jack Hogsden, now 28, of Hartfield Avenue, Hollingbury, and Joseph Perry, now 33, from Wick, Littlehampton.

They broke into Mr Kramer’s flat by smashing through his front door as he slept. They threatened Mr Kramer and demanded money, punching him in the face when he refused. Mr Kramer, who uses a mobility scooter to get around, suffered bruises and swelling to his face. 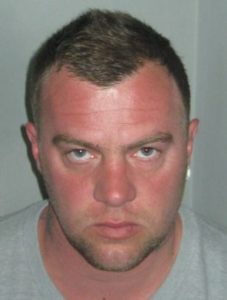 The three men searched his flat and stole his computer and DVDs.

After Paterson breached the terms of his release licence, Sussex Police said: “Police are trying to trace Lee Paterson, from Brighton, who is wanted on recall to prison.

“Paterson, 39, has connections with Portslade, Hove and Brighton. He was jailed for robbery and has breached the terms of licence on being released.

“Paterson is white, 6ft, of medium build, with brown hair and blue eyes.”

Anyone who recognises him or who knows of his whereabouts is asked to contact Sussex Police.

Man threatens Peacehaven supermarket staff with a gun this evening