A Good Samaritan who went to the aid of a young woman whose friend was screaming abuse at her had a knife pulled on him this afternoon. 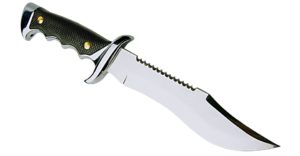 Handyman Paddy Mulholland was in Islingword Road this afternoon when he saw the pair, a young man and a woman, on the corner by the Codfather chippy.

The man was screaming at the woman, and after he walked away, Mr Mulholland approached her to make sure she was okay. The abusive man then returned and took out a large huntsman’s style knife, which he used to threaten Mr Mulholland.

Police are now appealing for witnesses to the incident.

Mr Mulholland said: “I was standing on the corner adjacent to the Codfather and I heard some raised voices behind me.

“A young man and a young woman were standing and he was screaming and shouting all sorts of things in her face.

“He carried on walking so I went over to see if she was okay. He turned around and took out a hunter’s blade and started walking towards me.

“Luckily I had a bag of tools and so I got out a hammer and warned him off and he turned around again. The woman looked absolutely terrified and scared to leave him, and she went with him.

“I waited for him to turn a corner so he couldn’t see me on my phone, and then I called the police. About 30 seconds later, there were four police cars screaming around the corner.”

A police spokeswoman said: “Police responded to a report of a man with a knife in Islingword Road, Brighton, at 2.20pm on Tuesday (6 December).

“The suspect was arguing with a woman and when a man passing by intervened, he was threatened with a knife.

“The man made off and officers searched the area but could not find him. No one was hurt.

“If anyone witnessed the incident contact police by emailing 101@sussex.pnn.police.uk or ring 101 quoting serial 751 of 06/12.”