Toys donated by contact centre staff will be handed over to children staying at the Royal Alexandra Children’s Hospital in Brighton today (Wednesday 21 December).

Staff at Domestic and General, in Queen Square, Brighton, have donated and wrapped more than 100 new toys on behalf of local children’s charity Rockinghorse.

A Rockinghorse-branded double-decker bus was parked outside the company’s Brighton office for a day and employees donned elf hats and manned a pop-up wrapping station on board the bus.

The toys are being delivered to children being cared for at the Royal Alex and the Trevor Mann Baby Unit over the festive period.

D&G contact centre director Ryan Keilloh said: “Our employees are keen to support Rockinghorse because many have a personal connection to the charity in some way. It’s an amazing charity that has helped so many little ones across Sussex.

“Christmas is a time for family and is very special for children so we wanted to do something extra for those who sadly can’t be at home this year.”

Featuring favourite characters from Inside Out, Star Wars and Kung Fu Panda, the wide range of donated toys range cater for children of all ages, including babies, toddlers and teens. 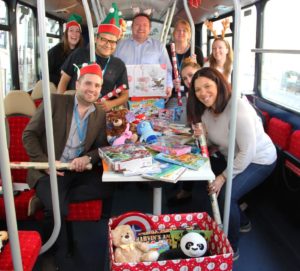 Rockinghorse head of fundraising Analiese Doctrove said: “Domestic and General are fantastic supporters of Rockinghorse all year round, fundraising and volunteering tirelessly to support the Royal Alexandra Children’s Hospital and other children’s services across Sussex we are supporting as part of our 50th anniversary.

“We are incredibly grateful for their support this Christmas and the gifts they have donated will go a long way to ensuring the young people we work with have a special Christmas this year.”

Rockinghorse is the official fundraising arm of the Royal Alexandra Children’s Hospital and also supports the Trevor Mann Baby Unit.

The charity raises money for life-saving and cutting-edge medical equipment while ensuring that children are treated in an environment that is better suited to their needs. It has been supporting children in Brighton for 50 years.

The organisation doesn’t receive any government funding so relies on the support of individuals, community groups, companies and trusts.

For the second year running, Domestic and General named Rockinghorse its local charity of the year in an employee vote. To date the company has helped raise over £12,000 for the charity.

For more information or to donate, visit www.rockinghorse.org.uk.