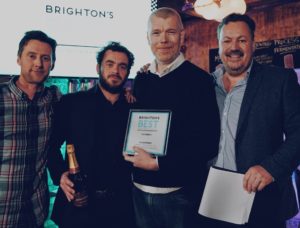 And there is also now a third food awards in town – the Restaurants Brighton BRAVO awards, which decide winners in a range of categories solely by public vote, launched last month and due to be announced online in March.

However, for the moment 64 Degrees can claim top spot, with 19 other restaurants ranked in a top 20 by a panel of 150 food writers, chefs, restaurateurs and business leaders.

Fine dining got the thumbs up with Isaac At moving from 20 to 14 and former Fat Duck chef Duncan Ray’s Little Fish Market entering the top five for the first time at number four.

64 Degrees chef and owner Michael Bremner said: “I’m totally blown away. I really didn’t expect it again because Brighton has so many good chefs and restaurants. We eat out in this town all the time and we’re constantly impressed with what everyone else is doing.”

Dave Miney, chef/owner of Bincho Yakitori, put his restaurant’s popularity down to flavour over fripperies. He said: “We are no frills, but people don’t care. They’re not interested in the weight of the cutlery or having table clothes. They just want good food.”

Individual awards went to Michael Bremner who made it two for two by holding on to Best Chef; Matt Ottley of The Salt Room, who won Best Barkeep; and Cin Cin owner David Toscano did the double on his Brighton’s Best Restaurants debut by scooping Best Welcome and Highest New Entry (no 6). “We opened in November, so I’m speechless to have been recognised so soon,” said Toscano. “Out aim was to give Brighton the Italian food it deserves, so we’re so pleased that people have understood what we’re doing.”

“We’re delighted that the new Top 20 reflects Brighton’s dynamic and fast moving restaurant scene,” said Andy Lynes, who, along with fellow Brighton-based food journalist Patrick McGuigan and 60 Second Reviews supremo Euan MacDonald co-founded and organised the awards. “It confirms Brighton as one of the best dining destinations outside London, and one that can stand side by side with cities like Bristol and Edinburgh. There’s something for everyone from innovative small plates to fabulous pizzas and of course great seafood.”