Two women were attacked this morning by a man behaving strangely in London Road.

Police on patrol first saw the man  attacking a 57-year-old woman shortly before 10am.

Brighton and Hove News understands the man was attempting to bite the woman’s arm as she stood frightened outside the British Heart Foundation charity shop.

A second woman, aged 27, approached the officers and told them the man had previously approached her and exposed himself, before hitting her with a newspaper. 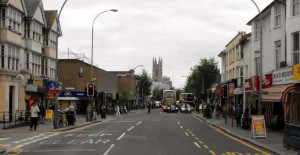 A 45-year-old man from Brighton has been arrested on suspicion of assault. He is currently in police custody while enquiries continue.