Main road out of Hove reopens after rush-hour crash

The main road out of Hove was closed during the rush hour this morning (Tuesday 18 April) after a car overturned.

The Kent, Surrey and Sussex Air Ambulance was called out although the man who had been driving the car was taken to the Royal Sussex County Hospital in Brighton by road.

A member of the Helicopter Emergency Medical Service (HEMS) accompanied the 52-year-old driver, from Hove, to hospital in a South East Coast Ambulance Service vehicle.

King George VI Avenue, known locally as Snakey Hill, was closed in both directions from shortly before 7.30am until about 10am.

Traffic queues jammed surrounding roads, including the slip road from the westbound side of the A27 Brighton bypass. 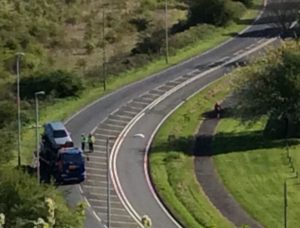 “The road is closed in both directions and the air ambulance had landed nearby. Drivers are being advised to avoid the area.”