A new doctors’ surgery opened in the centre of Hove yesterday (Tuesday 18 April) with the merger of two local practices. 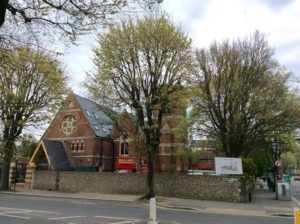 Patients will come and go through the Goldstone Villas entrance to the 1850s grade II listed church building, where a standalone pharmacy also operates.

The GP (general practice) surgery has been formed from the merger of the Central Hove Surgery, in Ventnor Villas, and the Sackville Medical Centre, in Sackville Road.

The surgery has about 17,000 patients on its list but is still accepting new patients although yesterday it was dealing with emergency appointments only. 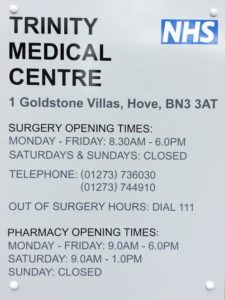 The surgery’s website said: “We are experiencing difficulties with the external communication systems and we are only able to deal with emergency appointments on Tuesday 18 April.”

Patients were encouraged to call 111 or go to the Brighton Station walk-in centre next, in Queen’s Road, Brighton.

The church was last used as a place of worship in 2008 and its parish dissolved in 2010.

It was bought by Medical Centre Developments and the £2.6 million conversion was carried out by Westridge to plans drawn up by Brighton architects Deacon and Richardson. 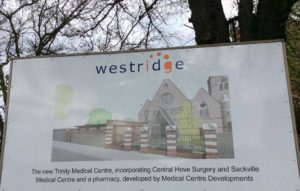