Students at a Hove school have raised more than £8,000 for charity from a series of events during Lent. 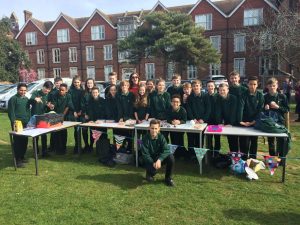 The pupils – at Cardinal Newman in the Upper Drive – have donated the money to Mary’s Meals and the Hangleton and West Blatchington Food Bank.

The school said: “Each class had to think of fundraising ideas and put together the activities themselves.

“Mary’s Meals will receive £7,000 which means that, combined with the £3,800 raised at Advent, the school has raised enough to feed every child in their linked school in Malawi for a whole year.

“The charity reaches over 1.2 million impoverished children with a nutritious meal in a place of education every day that they attend school.

“By providing food in a place of education, Mary’s Meals attracts hungry children into the classroom where they can learn, thrive and work towards a positive future.

“The Hangleton and West Blatchington Food Bank will receive £1,300 as well as food donations.

“The aim of the food bank is to provide food to individuals and families living in the local area who find themselves in crisis or urgent situations. 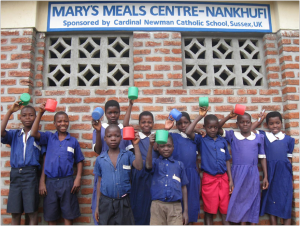 “They believe that everyone should have the right to food to feed themselves and their families and help dozens of local families every week.”

The food bank volunteers aim to ensure no one becomes dependent on their service by working with people to establish the cause of their need and using outside agencies to help them tackle their problems.

“It has been great to see that by acting together we can make a difference.”

Dr Kilmartin added: “This has been spectacularly demonstrated by the students of Cardinal Newman Catholic School this Lent and shows the ‘caritas’ spirit of the school.

“It has been a real team effort with all staff, students and parents getting involved.” 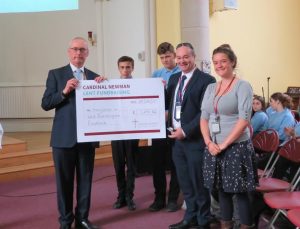 “Instead of sitting in a classroom getting an education, they are working in fields, begging on street corners or scavenging among the garbage to survive.

“Our vision is that every child should be able to receive one good meal every day in a place of education.

“Working together with people who share our ideals, we believe that our vision can be achieved in this world of plenty, where there is enough food for everyone.” 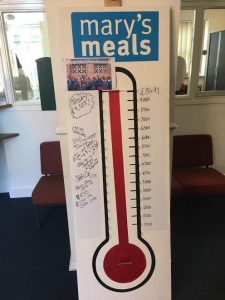 Colm Lennon, chairman of the Hangleton and West Blatchington Food Bank, said: “We have a fantastic relationship with Cardinal Newman, who provide us with food collections and financial assistance through the dedication of their staff and students.

“Without the support of Cardinal Newman and other schools and organisations we would be unable to continue to support local families.

“We have also been invited to talk to the pupils about the work we do and bring awareness of the poverty that exists in our local community.”

He said that it was our Christian duty to support those in our community who, for whatever reason, were struggling to make ends meet.

The food bank opened its doors to those in need in December 2014 and has since provided food to an average of 14 families a week.

A great night of sport in Brighton and Hove