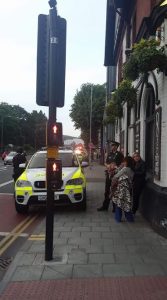 Armed police searched a block of flats in Brighton this evening (Friday 9 June) after reports that someone there was being threatened with a gun.

“Officers attended, including armed officers, to deal with the incident.

“Cordons were put in place for public safety.

“Inquiries were made and no persons within the affected address were under threat.

“No persons with a gun were found.

“No arrests were made.”

Two hours later police were still at the scene but the incident appeared to be being treated as over.