CCTV footage showing the moment an arsonist starts a fire at a Brighton restaurant by putting something through the front door as another person acts as lookout has been released by police.

The blaze at the La Tana restaurant in Ladies Mile Road, Patcham, was started at 12.30am on Sunday, 18 June.

Although nobody was hurt, the people living in the flat above were evacuated in the middle of the night as a precaution. East Sussex Fire and Rescue Service put out the fire.

The footage shows two men outside the premises. One is shown pushing something through the door and starting the fire while the other acts as a look out. They then run off.

Detective Inspector Andy Wolstenholme said: “We are keen to trace the two men seen in the CCTV footage. If anyone recognises them or has any information please contact us.” 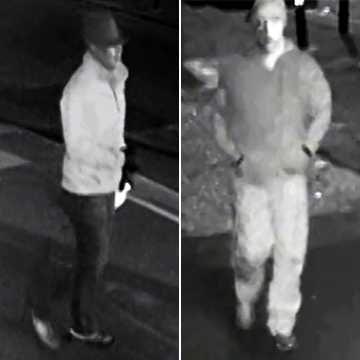 A 52-year-old Hove man was arrested on suspicion of attempted arson with intent to endanger life, two counts of criminal damage, blackmail, possession with intent to supply class A drugs and released under investigation.

Police are appealing for anyone with any information about the incident to report it online or call 101, quoting serial 50 of 18/06.