The Conservatives have welcomed the lifting of the threat to impose a late-night levy on pubs and clubs in Brighton and Hove.

The prospect of an extra tax on late-night venues has been raised a number of times, with Sussex Police – who would keep most of the proceeds – appearing keen on the idea.

But members of Brighton and Hove City Council and, in particular, the council’s Licensing Committee have been reluctant to give their support.

With pubs and clubs already going out of business, leading to a loss of jobs and business rates, some councillors and most of the trade were unconvinced that a levy would help.

Representatives of the local trade indicated that many venues would close earlier to avoid the tax, leading to bigger crowds on the streets at times and making trouble more likely – not less.

But police and some councillors and officials had hoped that the proposed late-night levy might help fund some of the initiatives aimed at keeping people safe on a night out.

These include taxi marshals, the Beach Patrol, Safe Space, Street Pastors and the Brighton and Hove Business Crime Reduction Partnership. 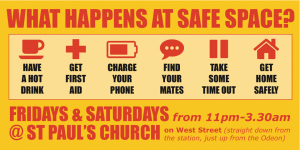 Conservative councillor Lee Wares said that a report to the Licensing Committee last Thursday (29 June) also highlighted the practice of “pre-loading” – drinking cheap alcohol mainly from supermarkets and off-licences before going out.

The report recognised the issue of “pre-loading” as a significant contributor to anti-social behaviour affecting the night-time economy.

But the businesses that benefit most from the practice of pre-loading, such as supermarkets, would not have to pay the proposed late-night levy.

Councillor Wares, a member of the Licensing Committee, said: “I am delighted that pre-loading has been properly recognised as a main factor of some of the problems we see on our night-time streets and this should end the debate about late-opening bars and clubs being solely responsible.

“I have long held that taxing just a small group of businesses to pay for safeguarding measures was wrong. I am pleased that the late-night levy is now effectively dead.

“Entities such as Safe Space and the beach buggies, currently under threat due to a lack of long-term funding and support, were recognised in the report as essential to making the city’s night economy safer.

“The Conservative group therefore hopes that the council and other agencies who benefit from these entities existing will come forward to provide the resources necessary to ensure these vital services continue.”

The issue is touched on in the draft Community Safety Strategy 2017-2020 which the council is expected to adopt soon. The strategy has been drawn up by the Safe in the City partnership which includes representatives of the council and police.

Among the ideas in the strategy is a proposal for a university alcohol policy, given the high number of students living in Brighton and contributing to the night-time economy.

Councillor Tony Janio, leader of the opposition Tory group on the council, said: “Our night economy is part of a billion-pound business that is absolutely essential to the future of our city and as such should be approached as an asset rather than a problem.

“There are, of course, risks to people consuming high levels of alcohol but it is time everybody got involved in finding a solution.

“I am pleased the Community Safety Strategy is finally helping to actively provide solutions rather than just being another talking shop.”

It was set up by volunteers and tries to prevent people who have been drinking or taking drugs from going in the sea. Volunteers also try to protect those at greater risk of robbery or predatory sexual behaviour.

Councillors were told that there were fewer sexual assaults when the beach patrol was operating and less need to call out the RNLI lifeboat or the coastguard helicopter.