Staff and customers were evacuated from the Tesco supermarket in Church Road, Hove, at lunchtime today (Friday 7 July) after a delivery lorry caught fire outside. 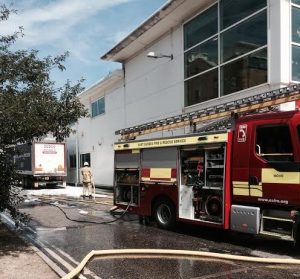 The evacuation was a described as a temporary precaution given how close the lorry was to the back of the busy store.

The lorry driver spotted smoke coming from the refrigerated trailer while pulling up to make a delivery shortly before 1pm.

East Sussex Fire and Rescue Service sent two crews – one from Brighton and another from Hove – to tackle the blaze.

The fire service said: “East Sussex Fire and Rescue Service mobilised two crews from Brighton and Hove to Church Road, in Hove, at 12.58pm following reports of a lorry on fire.

“Crews spent time damping down and the stop message came in at 1.34pm.”