The workers installing the 116 turbines for the Rampion Offshore Wind Farm, eight miles south of Brighton and Hove, have reached the halfway point.

Eon, the power company behind the £2 billion project, said that “two mighty jack-up vessels” would work together to install the remaining turbines – MPI Discovery and MPI Adventure.

The company said: “Both vessels bring the components of eight full turbines from Esbjerg, Denmark, to the site for installation before returning to the port for their next load as part of a continuous operation.

“Each round trip takes approximately 20 days.

“The installation of turbines will carry on through the summer and is expected to continue until late 2017.

“The commissioning of the turbines, to get them ready to start generating power, is due to begin in autumn.”

A 2,000-tonne offshore substation is also now in place having been lifted into position in April, marking yet another significant milestone for the project.

With 570 people working offshore on the Rampion project last month – the most so far – Eon brought in two floating hotel vessels – or floatels.

The aim was to “enable personnel to remain close to their workplace – saving both time and fuel on daily commutes”.

Eon said: “By using floatels, our technicians don’t need to transit to and from port every day.

“Instead they’re close to their workplace and can enjoy the vessel facilities, including gym, games room and restaurants, ensuring they’re well fed and rested ready for the next working day.” 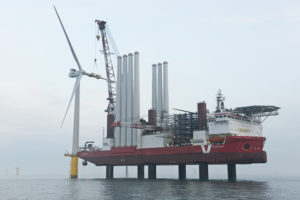 Back ashore, the company has been recycling the cable drums, delivery pallets and other wooden materials used during the construction of the cable route.

The materials have been recycled by the contractor Carillion using Brighton-based social enterprise Community Wood Recycling.

More than 12 tonnes of wood from along the cable route have been collected by the group, which was set up to rescue and reuse waste timber that would otherwise be landfilled, while also providing jobs, training and volunteering opportunities for local people who are marginalised from the labour market.

The last of the 90 miles of array cables, that will transmit the power generated by the wind turbines to the offshore substation, have now been laid.

Cable installation project manager Alan Kelly said laying the cable in a narrow corridor between cleared unexploded ordnances and boulders was a challenge on the wind farm site.

The array cable installation is a two-step process where the cable is first placed on the sea floor before it is buried by a chain-cutting method to at least one metre below the seabed.

The cable burial will be completed by the end of the summer.

Laid end-to-end the array cables would stretch from Brighton to London and back.

Having become embedded in the seabed about 500 yards off Lancing, the vessel became something of a local talking point.

Eon said: “Its location 500 metres offshore presented a number of technical and engineering challenges that had to be overcome before it could be safely removed.”

Rampion’s development and stakeholder manager Chris Tomlinson said that the digger was too far out to recover from shore so it was decided to bring in a specialist sheerleg crane vessel.

Mr Tomlinson said: “Planning the removal, engaging contractors, ensuring the right equipment and people were available and assessing the seabed for the arrival of the barge, meant the digger was in place for around three months, long enough to become a part of the local community.

“It was heartening to see the excavator become such a popular topic of local conversation.

“However, after considerable effort to ensure its safe and effective recovery, we are pleased to report the removal operation has been a success.”

Moby Dig will now be salvaged.

Leave a Reply to A O Cancel reply