A suspected thief has been captured on closed-circuit television riding off on a £1,000 bike in the centre of Brighton.

And today (Thursday 20 July) Sussex Police published his picture in the hope that he will turn himself in – or that someone will recognise him and report him. 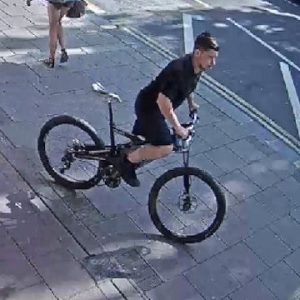 The force said: “Police have released CCTV footage of a man wanted in connection with the theft of a bike in Brighton.

“At about 5.07pm on Tuesday 13 June the suspect is seen to force the lock from the bike – a black Cannondale worth approximately £1,000 – from outside the Co-op in London Road and ride off on it.

“The victim – a local man in his forties – had left the bike locked up for only a few minutes while he went for a haircut when the incident happened.

“The suspect is described as a white man in his twenties, with short black hair and a goatee beard.

“He was wearing a black t-shirt, black shorts and black trainers.

“Anyone who witnessed the incident or who recognises the suspect is asked to report it online quoting serial 1063 of 13/06.