Bus stop demolished as coach crash closes A23 in Brighton

A coach crash closed the A23 yesterday morning (Saturday 22 July).

The vehicle, from the Aston Manor Coaches fleet, in Birmingham, demolished a bus stop on its way into Brighton. 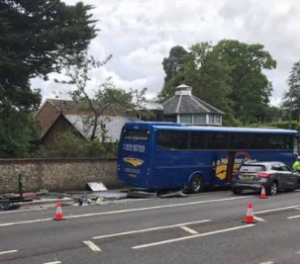 A car appeared to have turned left across the bus lane in front of the coach along the Withdean stretch of London Road.

A person in the car was taken to hospital after the crash.

There were no injuries reported to the coach driver and passengers.

Sussex Police closed the road in both directions as they dealt with the aftermath of the crash.

Diversions were put in place and the road was reopened after a couple of hours.

A23 Withdean reopened. Thank you for your patience. #CC974