Two people were due to appear in court this morning (Monday 24 July) charged with assault after a stabbing in London Road, Brighton, on Saturday night.

An 18-year-old-man is in a serious condition in hospital after being stabbed at the KFC restaurant. 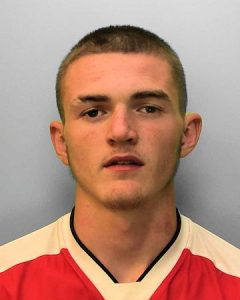 Mehash McKenzie, 23, a sales assistant, of Bolney Road, Moulsecoomb, and a 15-year-old-boy also from Brighton, have both been charged with causing grievous bodily harm and with having a knife in a public place.

McKenzie is also charged with having cannabis.

Sussex Police said: “At 8.25pm on Saturday (22 July) the victim sustained a stab wound to the stomach in the restaurant.

“He is still in a serious but stable condition at King’s College Hospital in South London.

“Police are still searching for 18-year-old Jordan Ash, from Brighton, who they want to interview about the stabbing.

“Ash is described as white, 5ft 9in, of slim build, with dark brown hair and brown eyes.”

Detective Inspector Andy Wolstenholme said: “If you know where Jordan Ash is or see him, do not approach him but please contact the police via 999 quoting serial 1363 of 22/07.

“If you have any other information, saw what happened or have seen any mobile phone footage of the incident, please contact us online.