Brighton’s first community pub made a profit in the past financial year, members were told at the Bevy’s annual general meeting (AGM) last night (Thursday 5 October).

And the event was used to launch the pub’s own beer, the Beast of Bevendean, a reference to various sightings over many years of a mystery creature prowling the area. 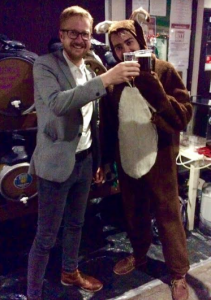 The Beast is brewed by the Holler Boys Brewery, just outside Uckfield, and is expected to go on sale in other pubs across the area, contributing vital funds to the Bevy.

At the pub, in Hillside, Moulsecoomb, management board chairman Warren Carter gave a snapshot of “one hectic week” in September to give a flavour of the past year.

He said: “WARM (Widening Access, Research and Mentoring), from Newport, visited for the weekend to see how we tick, delivering a Brains at the Bevy talk about their work in further education for people with mental health challenges, as well as enjoying lunch with the Friday Friends seniors club, Bevendean Down park run, our full English breakfasts and the garden show.

“They also got to see that anything is possible at the Bevy when as part of British Science Week we teamed up with the House of Cultural Curiosity who foraged materials and delivered workshops at Moulsecoomb Primary and the Bevy to make homemade shampoo.

“On the same evening that we were hosting a community business leaders programme meal (our general manager is part of this national programme), volunteers from Good Gym Brighton ran from the Old Steine before tackling the weeds in our edible pub garden.

“Our garden is looked after by volunteers and the fruit and veg used by our Friday Friends lunch club to make puddings as well as jams and pickles to raise money for their Christmas party.

“Many people with learning disabilities struggle with finding work so we have teamed up with St John’s College, in Kemp Town, who started working in the kitchen delivering our lunchtime meals and in our training kitchen.

“As usual we hosted Spiral Sussex, who bring their group of adults with learning difficulties to have a drink and a meal and play games.

“We are also working with the council’s learning disability employment team to offer short work placements behind the bar.

“It’s not just the breadth of services that make us a community pub but also the fact that we rely on volunteers to mow the lawns, fix the drains, collect glasses when we are busy or do a stint behind the bar as well as help organising events and tackle the mountain of paperwork that comes with any business.

“Recruits to our team of volunteers are much needed and always welcome. 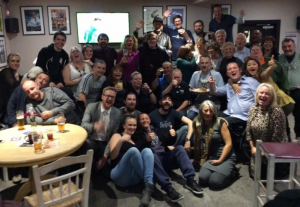 Not your usual AGM – the Bevy community pub marks another year

“The best example of the pub pulling the community together was our street party celebrating the past, present and future of the Bevy.

“We closed the street and had music, games, free food and a few victims were found for the stocks.

“We worked with Blockbuilders to come up with Minecraft designs for our knackered old garage, while Bevendean History Group jogged people’s memories with an aerial map of Moulsecoomb in 1936 that is now permanently on the dividing door in the pub.

“Our training kitchen has had children learning to cook up a feast then serving it to parents and carers at the end of each session and the Great Bevy Bake Off with kids making Victoria sponges.

“Brighton and Hove Food Partnership ran a six-week dementia café and we have plans to run a weekly dementia café.

“Our second series of Brains at the Bevy, where academics present a half-hour talk in language everyone can understand, has really caught people’s imagination and often plays to a full house, winning a commendation in a national universities awards programme.

“We have darts and bar billiards teams (our ladies darts team is the best in the city) and the local pigeon club meet every Friday and we have done pop-up bars at Moulsecoomb Primary summer fayre and Bev-Fest.

“We continue to raise money for Look Sussex – the blind and partially sighted club based at the 67 Centre – and will be asking shareholders to vote on which local charity we should support every six months. 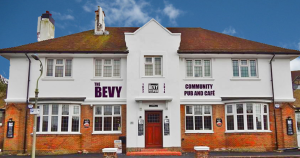 “We’ve had massage, plant sales, kids’ parties for Easter, Halloween and Christmas and a place for a woodcraft group in the winter.

“We had a Queen’s birthday celebration where the Lord Lieutenant visited, a Pie and Mash and Vera Lynn night, where our minibus once again helped people get to the pub who might otherwise be stuck at home.

“We also take Brighton and Hove Albion fans to every home league game.

“Brighton University design students did a module on community pubs and displayed some fantastic work. Check out the insect box in the garden.

“We sponsor a student rugby team in exchange for them doing some volunteering at the Bevy while masters students spent six weeks studying us – which included painting the toilets and putting on a fundraising quiz!

“We’ve been working closely with Steve from Holler Boys Brewery and will be launching our own beer with him – the Bevendean Beast – this weekend.

“It’s not all been plain sailing. We struggle to run a profitable kitchen and have an ongoing dispute with the council over the fact that even though we run so many services the council can no longer afford to, we still are being asked to pay full business rates. 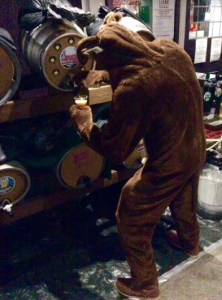 The Beast of Bevendean – aka Bevy bar manager Charlie Pyment – tests the pub’s own beer, pouring himself a pint of Beast

“We might not have won best community pub at the recent National Pub Awards but we think we have a blueprint of how pubs can change and survive into the future.

“In fact it’s Community Business Weekend, showcasing how communities have taken over the running of shops, pubs, piers …

“We might not get everything right but we reckon this is what a community pub looks like.”

Treasurer Bob Thrust said that the annual accounts recorded a profit of £19,833. But losses from previous years – the pub opened in December 2014 – meant that the Bevy would carry forward an accumulated loss of £13,164.

Tributes were paid to community development worker Helen Jones who stood down from the Bevy’s management committee at the AGM.

Members were told that general manager Iain Chambers would be sharing lessons from the Bevy at the Exeter Street Hall, in Brighton, on Wednesday 15 November at an event called Exploring the Community Business Revolution.

Other Brighton and Hove community businesses expected to be represented at the event include the Stoneham Bakehouse and the Saltdean Lido.

The Exeter Street Hall AGM is due to take place this evening (Friday 6 October).