Armed robbers held up a Brighton post office and made off with about £10,000, Sussex Police said this morning (Tuesday 10 October).

The force issued a public appeal for witnesses to the robbery which happened in St George’s Road, in Kemp Town, just after 3pm yesterday afternoon. 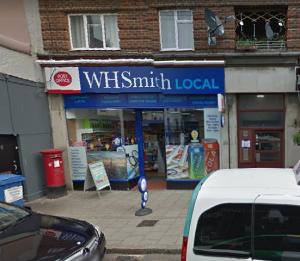 Sussex Police said: “Police are appealing for witnesses to a robbery at the WH Smith Post Office in St George’s Road, Brighton.

“The suspects struck shortly after 3pm on Monday 9 October and threatened staff with a knife before making off with about £10,000 down Burlington Street.

Detective Sergeant Helen Paine said: “This was a frightening ordeal for the staff and we are keen to hear from anyone who witnessed the robbery or who recognises the suspects.

“The first suspect is a white man, stocky, aged in his late forties, with a bald head and very closely shaven hair at the sides.

“He was wearing a grey tracksuit and black shoes.

“He was wearing a distinctive dark red tracksuit with a white stripe down the outside of the sleeve and leg.

“Any witnesses or anyone with information should contact police online or phone 101 quoting serial 846 of 09/10.”