Planners have given permission for 189 student flats to be built on the site of a shop and derelict pub in Brighton.

The proposed building – up to nine storeys high – would be on the site of the Lectern pub, a terrace of three houses and a Costcutter convenience store in Pelham Terrace, Lewes Road.

But it would be opposite the Pavilion Retail Park where supermarket chain Aldi intends to open a branch.

And it neighbours the Brighton University scheme just to the north on the Preston Barracks site where almost 1,200 student flats will be built in eight tall blocks along with a research lab.

The latest scheme was approved by members of Brighton and Hove City Council this afternoon (Wednesday 13 December) despite the reservations of some councillors.

The council’s Planning Committee heard and set out a number of concerns during a debate at Hove Town Hall.

A report noted 23 letters of objection, some complaining about the high proportion of students in the Lewes Road area and calling for more family homes and a better mix.

The report summed up one aspect of the objectors’ views as: “The Coombe Road area is losing its identity and turning into a campus.”

Some felt the proposed building was too tall, too imposing and had a mediocre design, with neighbours worried about overshadowing, overlooking and the prospect of noise disturbance.

They were also worried about more pressure on local parking spaces.

The proposed building includes five penthouse flats in addition to the 189 student flats. And a report to councillors said that 12 of the student flats would be wheelchair accessible.

The block is in a designated “tall building corridor” and an area that the council has been keen to develop.

They emphasised the need for more purpose-built student flats to ease the pressure on the stock of family homes in the area. 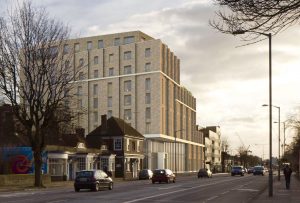 A visualisation of the scheme

The report to councillors also highlighted concerns about the effect of the scheme on bats although a survey found little activity. The only species recorded was the common pipistrelle.

Councillor Leo Littman objected to the loss of mature trees from the pub garden and questioned whether measures to “green” the scheme would genuinely make up for that.

Planning officer Jonathan Puplett said that “greening” measures would not necessarily provide like-for-like mitigation but would provide some benefits.

The developer, a London company called CKC Properties, would be expected to pay the council about £370,000 in “developer contributions”.

The money would go towards the cost of maintaining local parks and open spaces, sports provision, improving transport infrastructure and supporting jobs.

The report to councillors said: “The proposed development would provide 189 student studios which represent a substantial contribution towards the need for purpose-built student housing in the city.

“The site is ideally located for such development, being in close proximity to university teaching accommodation, on a main road.”

Lewes Road is also classed by the council as a “sustainable transport corridor”. 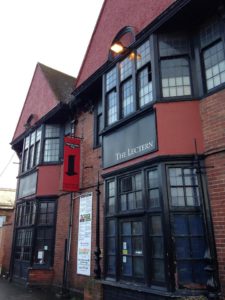 The scheme includes cycle parking and a community hub, which is expected to house a café and meeting space.

The report to councillors said: “The proposed building is considered to represent a high-quality design which would have a positive impact on the Lewes Road street scene.”

It acknowledged the loss of the pub, garden and trees but said that on balance the benefits of the scheme outweighed what would be lost.

The report added: “The proposed building is of a considerable scale and would have an adverse impact on the amenity of some neighbouring occupiers due to a loss of daylight to a number of windows although these impacts have been fully assessed and it is considered that the loss of daylight would only be at a harmful level in a small number of cases.

“Overall, while the scheme would cause harm in some respects, these concerns have been fully assessed.

“Overall, it is considered that the scheme would deliver substantial benefits and that the concerns identified do not warrant refusal in this case.

Labour councillors Clare Moonan and Tracey Hill were concerned that the rents appeared to be targeting wealthier overseas students.

But, Councillor Hill said, “as a city we are short of purpose-built student housing.”

The scheme might not reduce the number of shared houses – known as houses in multiple occupation (HMOs) – but future demand may be lessened which was important.

Conservative councillor Joe Miller and Green councillor Phélim Mac Cafferty urged a “watertight” agreement to secure community use, not least so that local groups were not priced out.

The Planning Committee voted 11 to 1 in favour of the scheme, with only Councillor Littman, a Green, opposed.