Southern has been given its lowest ever rating in an annual passenger survey, coming bottom for the third year running.

Consumer group Which? said: “Southern Rail suffered its worst ever score in the latest Which? customer satisfaction survey. 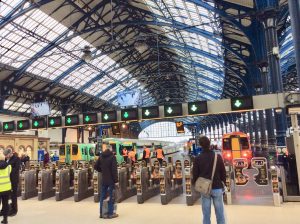 “One year ago it received an overall customer score of 44 per cent.

“Almost half (46 per cent) of the customers surveyed this time reported that their last journey with Southern was delayed.

“At two stars, the highest mark it received was for the availability and cleanliness of its toilets and general condition of the carriages.

“Our survey of over 2,000 commuter experiences also found

“With passengers enduring a winter of misery on the railways, Which? has today launched a campaign taking the industry to task on unacceptable services that don’t deliver even the basics for long suffering passengers.”

Which? said that it was calling for

Vickie Sheriff, Which? director of campaigns and communications, said: “After months of disruption, it’s no surprise to see Southern at the bottom of our customer satisfaction survey.

“Though Southern has performed particularly badly this year, the whole sector is continually failing passengers.

“Enough is enough – we need rail services that finally deliver for their passengers.”