Brighton hospital admits half a dozen flu patients a day

Brighton and Hove’s main hospital is admitting about half a dozen flu patients a day.

A message to staff at the Royal Sussex County Hospital this week said: “Our staff will be seeing many more patients who are carrying the flu without developing symptoms.”

The admissions figures were described by the trust as “not exceptional” although the message added: “The flu vaccine remains the best way to protect yourself from catching flu and getting sick yourself or passing it on to your friends, family, colleagues and patients.

“Not yet had your flu jab? Look out for roaming vaccinators over the next few days or attend the occupational health drop-in clinics.”

More than half of the staff working at the Brighton and Sussex University Hospitals NHS Trust, which runs the Royal Sussex, have already had a flu jab.

The number of staff who have been vaccinated is up 10 per cent on the rate last year.

Trust bosses are believed to be trying to check how many staff have had the jab at their local GP surgery so that the true vaccination level is not underestimated.

The message to staff said: “Our colleagues at Western Sussex Hospitals have declared a flu outbreak and have had to close several bays to control the spread of infection.”

And it also said: “In the last few days you may have seen the national newspapers warning of an outbreak of ‘Australian flu’.

“In fact, the H3N2 strand of flu they’re warning about is one that was predicted to hit here and which the flu vaccine protects against.

“The flu map of the UK now shows cases in every area of the country, with health trusts reporting significant increases in flu cases.

“In the first week of 2018, there were 27 flu related deaths, 240 new flu related admissions to ICU/ HDU and 758 hospitalisations.

“In the last week of 2017 and the first week of 2018, we have seen more flu deaths and hospitalisations than in the whole of the flu season so far.” 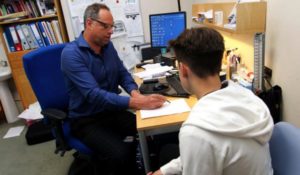 Brighton and Hove Clinical Commissioning Group (CCG) said: “Residents in Brighton and Hove are being reminded of simple steps to take to protect themselves and others from the spread of the flu this winter: Catch it, bin it, kill it.

“Cold and flu germs can live on some surfaces for hours, meaning they can be easily transmitted. “Just a few simple steps can help prevent the viruses from spreading

“The NHS in Brighton and Hove is calling on people to heed the ‘Catch it, bin it, kill it’ message and urging those at risk of severe illness from flu – including those aged over 65, under 65 with a long-term condition, young children and pregnant women – to get their free flu vaccine now as not too late.

“Anyone at risk of health complications if they catch the flu can receive the free vaccine through their GP and from their local high street pharmacist. Parents can speak with their GP about how to get the vaccine for their children.”

Brighton GP David Supple said: “We are urging those at risk of complications to get their free flu jab now as it’s still not too late to get it and get protected.”

Dr Supple, who chairs the CCG, added: “Once flu is spreading widely, apart from vaccination, hygiene is the only method that can limit the spread of infection.

“Always cover your nose and mouth with a tissue when you cough or sneeze, put the tissue in the bin – don’t save it to reuse – and clean your hands as quickly as possible.”